Parties vs. The People (tl;dr warning)

It's come to my attention that some people don't like me very much. Seriously, I cry myself to sleep over this. I think I might just be able to get over it with time and years of professional counseling, but more important is to make sure that the RIGHT people dislike me for the RIGHT reasons.

I talk a lot of smack on the Democratic and Republican Parties. Seems there are a few people who have taken that personally. I apologize for that. I never intend to insult anyone personally. It is possible, desirable, and necessary to disagree without being disagreeable. 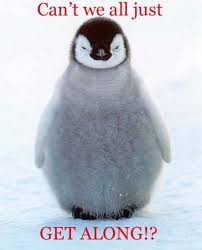 I think it's important that I clarify my meaning. There are liberals and Democrats. There are conservatives and Republicans. Then there are the Democratic and Republican Parties. There are also libertarians, Libertarian Party members, and the Libertarian Party. I am all three. Each of these parties, as well as the Independent Party of Delaware, the Constitution Party, the Working Families Party, and The Blue Enigma Party have different cadres. There are ideological sympathizers, who may be members of any party or none at all. There are members of the party who are registered to vote with the Delaware Commissioner of Elections listed as such.

Then there are the organizations which represent the party members. These organizations are defined in Chapter 1, Title 15 of the Delaware State Code. The definition requires the election of a state committee at a state convention. This state committee raises money on behalf of the party (in accordance with Chapter 80, Title 15 of the Delaware State Code) and files the necessary paperwork with the Commissioner of Elections to list candidates on the ballot in general elections (in accordance with Chapters 31 and 33, Title 15 of the Delaware State Code). Chapter 1 further defines a "State Committee" and a "County Committee". As the Kent County Chair for the Libertarian Party of Delaware, I am part of this statutory establishment. So is Tom Ross, John Daniello, Senator Margaret Rose Henry, Commissioner Jody Sweeney, Hans Reigle, Wolfgang von Baumgart, Pell Sherman, Earl Lofland, Jeffrey Brown, Jim Rash, George Barnett, Wendy Jones, Ron Sams, and a number of others.

If you are registered as a member of a political party, some of these people represent you. They were selected at a state convention, typically held in non-election years (odd years, like 2011). The Sussex County GOP is experiencing a much discussed schism between its members and its organized representation. To a degree, a schism has developed in general between the conservatives on one side, the Delaware Republican Party on the other, with Republicans split between the two. This was on open display in the US Senate primary, but was also a factor in the US House primary. I should note they managed it well during the recent New Castle County Council President elections, but the divide is more dramatic in the southern counties.

According to Delaware State law, there are "major political parties", like the Democrats and Republicans (which I refer to as incumbent parties for my own nefarious purposes). There are also "minor political parties", like the Libertarian Party of Delaware and some other ones that are also cool but not as awesome as we are (which I call "alternative parties" for the same nefarious purposes...awesome parties and better parties would also be acceptable).

The Libertarian Party convention's selection was legally binding on the Commissioner of Elections. The Republican Party's was not. According to Title 15, Chapters 31 and 33, each classification of political party has a different process for choosing its nominees. The Republican Party is a "major political party", so its state convention only exists (by law) for the purpose of selecting the State Committee (and County Committees if County Conventions are not also held for this purpose...the law's a little fuzzy (to me anyway, and I know this a double parenthesis, I do math, not English, shut up...commas)).

The "major political parties" select their nominees through a "direct primary election".

While the Republican State Convention(tm) may have chosen Michelle Rollins, the primary election chose Glen Urquhart. The candidate(tm)? Glen Urquhart.

Why is the convention choosing candidates if it has no legal ramifications and the primary voters can choose someone entirely different?

Lest anyone think I'm picking on the Republicans, the Democrats did the same thing with the Treasurer race and any other ones where a primary was involved. I wasn't paying as much attention to them and I don't feel like looking things up right now so I can't name names. Deal with it and do your own research. I also believe they have every right to do this as private institutions. Whether you want them to represent you or not is another matter.

This process means that before the primary, the candidate(tm) is the one chosen by the State Convention(tm). Any candidate that wants to get funding from the bank accounts the party organizations have spent the past two years begging and scraping to fill will toe the party line. All members of the State Committee(tm) will voice full throated support for the candidate(tm). All candidates(tm) will support other candidates(tm).

Why did I bother writing this article? Wasn't this supposed to be some sort of apology? Is there a POINT?

The point is that my criticisms were, are, and will always be intended for the State Committee and the State Convention, and the process and participants that shape them. I have no problem with Republicans or Democrats. I have no problem with liberals or conservatives. We disagree on some things but not on others. Let's work on that. I don't even bear a personal animosity towards the members of the statutory establishment I criticize. I know they are acting in what they perceive to be the best interests of their organizations and doing the jobs they were asked to do.

I just think they're doing it wrong, they're serving their fundraisers and donors instead of their voters, and I think the country's the worse for it. I think the Libertarian Party offers a way to incentivize positive change. I think the Libertarian Party acts more transparently and more responsively to the desires of its members. That doesn't mean we don't have our weaknesses. Believe me. We do. I could write a whole new article on that and my attitude may well be one of them, but this is getting long enough as it is.

Again, I have nothing against anyone personally, and I don't even have a beef with conservatives, liberals, Republicans, or Democrats. I just think the organizations formed and granted the statutory authority to represent them at the local, state, and national level are distorting the incentives of our elected leaders in a way that hurts the country and the American people. I think the Libertarian Party and other alternative parties can help.

I hope we'll get the benefit of the doubt and the opportunity. I hope we can have our discussions in good faith without taking things personally. The state's too small for all that. To anyone who's taken anything I've said personally, sorry.