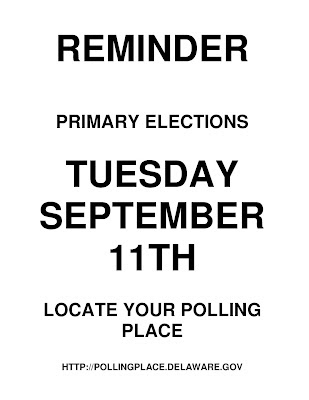 You should find your own polling place by looking it up here, but if you've been referring to the map linked on the left side bar, it was wrong.  It showed the 2010 polling places before the redistricting.  The updated map is here and the side bar link has been updated.  I apologize for the confusion.
Posted by Will McVay at 9/10/2012 04:12:00 PM No comments:

A Letter From Hans Reigle

Many of you may have received it.  It's some delightful reading.  It proclaims me the leader of a leaderless movement, claims not to know a job history posted publicly on the internet via Facebook and LinkedIn, and chronicles my various party changes and political engagements over the last two years.

Hans also tells you that you should all vote for my opponent because he will carry water for other Republican candidates in the state who are frankly not worthy of the distinction.  I won't.  If you're not ok with that, don't vote for me.
Posted by Will McVay at 9/09/2012 10:59:00 AM No comments:

Today is Jury Rights Day.  I recently became the Delaware state contact for the Fully Informed Jury Association and if elected to the Delaware House of Representatives, I would introduce a bill similar to the one recently passed in New Hampshire which modifies the instructions given to juries to clarify that they have the right not only to judge the facts but the law itself, and refuse to convict if they believe the defendant should not be punished even if they violated the law in question.  This right was established early on in the British colonies of North America and was critical in the disruption of slavery and alcohol prohibition.


September 5th is Jury Rights Day! On this day in 1670, William Penn was put on trial for violating England’s Conventicle Act, which prohibited religious assemblies other than the Church of England. Although he had clearly violated the law, Penn’s jurors refused to convict him as ordered by the judge, even when they were imprisoned and denied food and water. Upon appealing their sentences, a higher court ruled that jurors can NOT be punished for their verdict. This ruling firmly established the right of the jurors to refuse to enforce bad laws—a right that jurors still have today. More information about Jury Rights Day and your right as a juror to say “No!” to bad law is available from the Fully Informed Jury Association at 1-800-TEL-JURY or online at FIJA.org.

Did you know that before the Civil War, juries often refused to convict people for helping slaves escape, even though they had clearly broken the Fugitive Slave Laws? And did you know that even before that, most northern states had outlawed slavery as a result of jury verdicts? Most important, did you know that jurors today have the same power to reject bad law as they had back then? More information about a juror’s right to say “No!” to bad law is available from the Fully Informed Jury Association at 1-800-TEL-JURY or online at FIJA.org.

Delaware voters will have the opportunity to meet candidates for state and local office thanks to the efforts of the 9-12 Delaware Patriots.  They have organized a "Meet the Candidates" night at the Dover Elks Lodge for Tuesday, September 4th, beginning at 6pm.

This event will offer a great opportunity to meet candidates for local office and may be the only opportunity to see candidates side by side before the primary election on September 11th.  Please check your local polling place here and view a map here.