It was 2005. I was a junior at the University of Delaware. For those of you who attended UD or have been there at all recently, you know parking is a problem. It was a big problem for me...largely of my own making.

I had more than a few unpaid parking tickets.

Eventually, they caught up with me, and booted my car.

It was homecoming weekend. I was impatient. I was arrogant. That's just who I am, but I certainly wouldn't do this again. What I did, was take the boots off. Turns out, it's not really that difficult. All you have to do is let some of the air out of your tires, use something like...say...a soda bottle to protect the tire, and pry the boot off. You won't damage the boot, but you will have to replace the air in your tires.

Here's where I screwed up. I put the boots in my car to return them to the police station up the road. If I hadn't, and just left them on the side of the road to rust, this whole incident would have inevitably played out differently. But I did, and I headed up to the Newark Police Department. Unfortunately, there was no air in my tires. So I stopped to remedy that. While I was stopped, just as I finished, two cars from the Newark PD pulled over at the same gas station and demanded that I open my trunk. Turns out, someone had seen me remove the boots, and called the 5-0.

I knew what they were after. I could have asserted my rights or played a similar game, but I didn't bother. I opened the trunk and let fate take its course. They saw the boots, and put on the bracelets. They said I was "stealing" the car boots. Because apparently there's a huge market for locked boots.

Side note. I worked as a delivery driver for Wings to Go on Main St. in Newark. Since the Newark Police Department occupied itself with arresting kids for "stealing" car boots instead of prosecuting criminals, a number of the other drivers had been robbed. One of them had her car stolen. For this reason I was carrying an extensible police baton in my car, near the driver's seat. 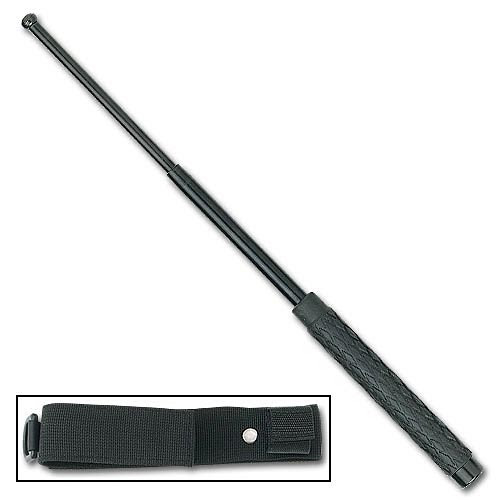 Now, when I was arrested, I was not in the car. I was outside the car, refilling my tires. During the search of my vehicle, the baton was found, partially obscured under my seat. When I was charged, a felony charge of carrying a concealed deadly weapon was added to the misdemeanor charge of theft under $1000. I was eventually released later that day on a bond of $1500, which I did not have to pay. If I had failed to appear in court, I would have, but I did...so it didn't matter.

When I appeared in court, I had no attorney. I was a poor college student...I couldn't afford one. So I filled out the paperwork and got myself a public defender. Now comes the "Preliminary Hearing". At this phase in the proceedings, a judge determines whether there is sufficient evidence to move on to the arraignment phase. The arraignment is the part where you actually plead "guilty" or "not guilty". We hadn't gotten that far yet. My public defender recommended that I waive my right to a preliminary hearing, as they are usually formalities that are upheld by the judge. By now I was feeling a lot more ornery and like I was being mistreated by a petty and vengeful Newark Police Department. The judge agreed, as far as the felony charge went.

"He wasn't carrying it, it wasn't concealed, and it wasn't a deadly weapon. Charge dismissed." Those were her exact words. I remember them vividly. I was pretty happy. The theft charge was better substantiated as it really was a question of "what I would do next". Whether I was actually returning them to the police or taking them to my buddy who fences locked car boots for tons of cash. Note to the literal: This friend does not exist.

So I had to come back a few weeks later for an arraignment. My public defender, once again, recommended that I forgo my rights and plead guilty in exchange for "Probation Before Judgment". This meant I would pay a bunch of money and be on probation for a few months, then the charge would be expunged and not entered as a conviction on my criminal record. I didn't have a bunch of money, I certainly didn't want to give what I had to the state, and I didn't have any intention of keeping the car boots or selling them to buy Ramen noodles. I dug in. I told them I was going to plead "not guilty" and demand a trial before a jury of my peers.

The prosecutor balked. He didn't think his case was that strong, because seriously, kids...who steals car boots? That's just ridiculous. He decided not to prosecute and dropped the case.

There's no shady deal. No buyoff. No dirty tricks. Just an innocent man, demanding his rights, and finding justice.